Text and Photos by JIM KING (used with permission)

Author's Note: The Quanah, Acme & Pacific Railway was not part of my railroad vocabulary as I was growing up in central Texas. I later discovered that its story was brilliantly chronicled by Don L. Hofsommer in his book The Quanah Route published by Texas A&M University Press in 1991 (a work upon which I rely heavily for historical information in this article). Reading this book reminded me that the area served by the QA&P was part of a vast middle ground of north Texas, well off the beaten path between Fort Worth and Amarillo. The Quanah Route motivated me to visit unknown places with unusual names like Roaring Springs, Paducah and Floydada, places lightly traveled and visited only by those who intend to be there. I went there, searching for traces of the QA&P; this is the story of what I found.

A few miles west of Quanah, the traffic flowing along the US 287 freeway crosses an overpass that bridges a creek and a couple of rail lines that are scarcely visible from the highway. Few drivers notice a non-descript industrial plant along the north side of the highway, and fewer still have even a vague idea of its purpose. Yet for much of this century, this site, Acme, Texas, was one of the largest plaster production areas in the U.S. For many years, a huge gypsum deposit was mined and converted to plaster and cement products which were shipped by rail nationwide. The Fort Worth and Denver City (FW&DC) Railroad ran conveniently nearby while additional connections became available to the north and east via the St. Louis San Francisco ("Frisco") Railway in Quanah. By 1900, two competing plaster operations were well established -- the Acme Plaster Company at Acme owned by Samuel Lazarus, and the Salina Cement Plaster Company a mile north at Agatite. The two plaster operations had different rail access; Lazarus' ownership included the tracks and switching locomotive on company property, while the Agatite operation was switched by the Acme Tap Railroad controlled by the FW&DC. Lazarus believed his business was constrained by the rates and service offered by the FW&DC so he conceived a plan to build his own railroad north to Oklahoma. Such was the genesis of the Acme, Red River and Northern Railway (ARR&N).

The formation of the ARR&N alarmed the FW&DC, particularly when they proposed to build east to Quanah to a connection with the new Frisco line from Oklahoma City. Instead, an agreement was negotiated to permit the ARR&N to serve both plaster operations, with trackage rights on the FW&DC from Acme to Quanah for connection with the Frisco. This arrangement worked for several years, but Lazarus never abandoned his vision of a larger railroad operation. In 1909, the ARR&N was re-chartered as the Quanah, Acme and Pacific Railway and announced plans to expand west from Quanah toward the plains of Texas. 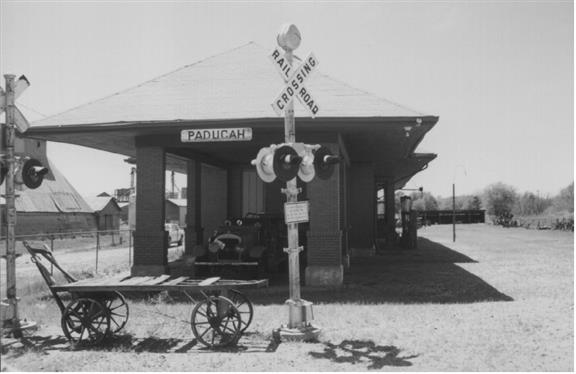 The year 1909 saw the QA&P complete 35 miles of construction from Acme to Paducah, which remained the end of the line for nearly three years as management contemplated possible extensions to the west through Motley County, where the terrain was much rougher. The Matador Land & Cattle Co. ranch was the major landholder; the ranch offered a free right-of-way to the railroad, but to minimize operating and construction costs, the railroad preferred a route further south. Local citizens were understandably upset when the ranch and the railroad agreed to route the line several miles south of Matador through a new town of Roaring Springs to be jointly developed. Construction commenced in late 1912 and Roaring Springs was reached in the summer of 1913. Refusing to be bypassed, citizens formed their own shortline railroad built from Matador to a junction with the QA&P near Roaring Springs. The Motley County Railroad was a bare-bones line that struggled to maintain operations throughout its existence. In 1927, the QA&P acquired the Motley County Railroad, but it was abandoned in 1936.

World War I and the desire among several railroads to expand service into the south plains of Texas created legal and financial turmoil that kept the end of track just west of Roaring Springs for 14 years. Eventually, the ICC approved a plan to allow the QA&P to build to Floydada, an agricultural center on the Caprock Escarpment that was already the terminus of a Santa Fe branch line. Construction began in 1927 and the rails reached Floydada in the summer of 1928.

Santa Fe resisted the connection at Floydada from the beginning. They were willing to accept local traffic, but preferred to use the Frisco connection at Avard, OK for long haul traffic. When Santa Fe placed additional restrictions on traffic interchange at Floydada, the QA&P took their case to the ICC. Beginning in 1934, the QA&P lost a series of court cases and ICC rulings, but refused to admit defeat. Each negative ICC ruling was met with a motion for rehearing and reconsideration. Eventually, the financial details produced by Santa Fe in response to ICC questions began to support the QA&P's case and in 1938, the ICC ruled in their favor. By 1939, the Floydada gateway was wide open to transcontinental traffic.

The QA&P's westward expansion ended at Floydada, but this was not the end of construction. In 1928, the two plants at Acme came under common ownership and it became necessary to move cars between them. This precipitated a disagreement over switching fees among the plaster company, the QA&P and the FW&D (which had resumed switching duties at Agatite through the Acme Tap Railroad in 1914). Negotiations failed to resolve the issue so the QA&P proceeded to construct a parallel line from Acme to Quanah, surrendering trackage rights on the FW&D. Near Quanah, the new line curved away from the FW&D to the north and then back due east to a junction with the Frisco interchange yard north of town. This is the only track originally built by the QA&P that has survived.

Opening the Floydada gateway had been a life or death struggle for the QA&P; management knew the railroad could not survive on local traffic alone. This dependency on overhead traffic doomed the QA&P when operational efficiencies motivated Frisco and Santa Fe to close the gateway in 1973. The Paducah - Floydada section was abandoned in 1979, followed by the Acme - Paducah line a few years later. The Frisco was acquired by the Burlington Northern in 1980, and the QA&P soon ceased to exist.

Like many railroads in Texas, the QA&P's local service had declined as paved roads and cheap gasoline gave rural Texans more flexible transportation options. Unlike other short lines, the QA&P's business base was interstate traffic, and they exploited this niche to the maximum extent. 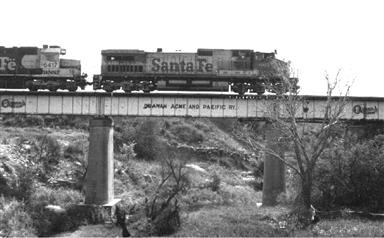 It was an unusual situation -- a short line railroad focused on selling transcontinental traffic -- and the odd Floydada gateway, essentially a connection between two agricultural branch lines, easily added 40 years to the QA&P's existence. But the Floydada gateway ultimately served only the QA&P's interests as Frisco and Santa Fe had more efficient options for interchange. Sooner or later, this tragic flaw would become important and the end of the QA&P would come soon thereafter.

The Agatite facility was abandoned long ago and they now make fiber-board products at the Acme plant owned by Georgia Pacific. The bridge over Groesbeck Creek still says "Quanah Acme & Pacific Ry", but it's now owned by BNSF, which absorbed the QA&P and all of the railroads with which it interchanged. The former crossing diamond at the interlocker for the FW&D is now just a siding switch underneath the US 287 overpass at Acme. But the QA&P heritage survives; every day, someone stops at the depot museum in Quanah and learns about the short line railroad with the interesting history.

Jim King Adds: Although [the Southwest Railroad Historical Society] receives a lot of letters, we don't get that many directly from railroads, especially railroads that have been defunct for twenty years. So you can imagine our surprise when a letter arrived at the musem from the "Quanah, Acme and Pacific Railway Co., General Offices, Quanah, Texas", complete with company logo on custom printed stationery. Best of all, the letter was from Don Hofsommer, author of The Quanah Route and many other works of rail history. I had been fortunate to be able to locate an address for Professor Hofsommer in St. Cloud, Minnesota, and had sent him a copy of the Winter 1999 issue of Clearance Card, the cover story having been inspired by my reading of his history of the QA&P railroad. I certainly appreciated his taking the time to respond in such an interesting and unusual way.

I would like to thank Jim King for providing the material for this article, originally published in Vol. 36, No. 1 of The Clearance Card. -- Greg Harrison

Thanks to Jim King for contributing information.
❮ ❯