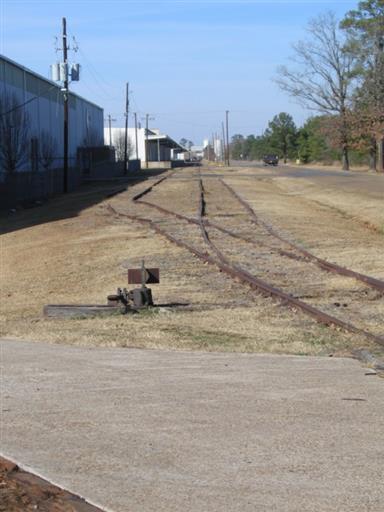 Originally the "Shreveport Holding & Reconsignment Depot", Slack Industrial Park had its beginnings in 1948 as a military supply depot for nearby Barksdale Air Force Base. It was served by both the KCS and the Texas & Pacific railroads; the tracks from both lines still exist and are in use (the ex-T&P line is now owned by Union Pacific). While today it is known as "Slack Industrial Park" (named for a deceased airman), it has gone through a number of names as its usefulness slowly diminished to what it is today: a mostly desolate area marked with unused military-style warehouses and abandoned railroad tracks.

Further information can be found at this location, Barksdale AFB Off-Base Sites, from which I've included an excerpt:

Named the "Shreveport Holding & Reconsignment Depot," this installation is visible on a 1945 map of the Barksdale Field area (U.S. Engineer Office, 1945, June 22). It was assigned to ATC and Barksdale AFB on December 1, 1948, then transferred to SAC on October 1, 1949, under the name "Shreveport QM Depot" (QM for Quartermaster) (ATC Index). That was the only document I found assigning the depot to Barksdale AFB. The designation changed from "Shreveport Quartermaster Depot" to "Slack Air Force Depot" on December 14, 1949 by DAF GO 105, same date. It transferred from SAC to Air Materiel Command on April 1, 1954 by DAF GO 28 dated July 13, 1954. Redesignated again, "Slack Storage Site" was disposed of on May 1, 1961 (Mueller, 1982). Situated in south Shreveport, it is now the Slack Industrial Park, with Beaird Industries as the largest tenant. It is just north of Industrial Loop; south of Hwy 3132, and east of I-49. Many of the military warehouses and rail lines still exist near Beaird's newer facilities.

Stretching one mile long, the site lies just to the northwest of the incorporated town of Forbing, Louisiana. Despite the emptiness and otherwise derelict conditions of most of the site, life and rail service does still exist in limited quantities, as Beaird Industries (a metal fabrication company) and Ash Grove Cement continue to rely on railroads; a few other companies are scattered throughout the park, but with no need for railroad service.

The entire area was once served by a double-ended double-tracked railroad siding that ran the length of the park. Both tracks ran on the east side of the park along a line of warehouses, with crossovers between the tracks spaced at varying distances, typically around 1,000 feet apart. Other tracks split off the west track, themselves double-ended; thus the entire park looked like a ladder when viewed from the sky, the spaces between the rungs of which varied greatly. A couple of spur tracks also existed within the park. The rail history of the site also includes an engine house, as military installations often had their own locomotives and maintenance facilities; the engine house was located in close proximity to the cement plant's location.

Michael M Palmieri Writes: At the time of my inspection, on 10 June 1985, most of the former Government property, including the three large warehouses, was owned by Wheless Properties, Inc., which was developing the industrial park; and there were about a dozen tenants. (The property was being managed by the Sealy Realty Co. of Shreveport, and I got to speak to Sealy's property manager about the park.) There were also several newer warehouses Other landowners included Riley-Beaird, AFCO Metals, and Arkansas Cement The Halliburton Company owned the former government railroad yard on the east side of the industrial park, but was not using the property. I have no idea what the ownership or utilization is now.

This facility was constructed for the Army under Directives RE-D 536-d, dated 24 January 1942; and RE-D 773, dated 10 April 1942. It was originally identified as the Shreveport Holding and Reconsignment Point Depot; but at some point it was redesignated as the Shreveport Quartermaster Depot, and some correspondence refers to it as the Shreveport Army Services Force Depot.

The facility was constructed for the temporary storage of military supplies. Most of the installation was used for open storage. The principle structures were three 181x964-foot warehouses. In addition to these, there were about 40 support structures, including an administration building, locomotive shop, guard towers, and assorted sheds. The installation also included several miles of railroad track.

At depots such as this, supplies and materials were shipped in from factories, mills and suppliers, typically in carload lots, and then shipped out to installations as needed If a camp or base didn't need an entire carload of something, the depot could ship whatever quantity was required; and a carload or truckload might include an assortment of supplies from the depot's stock.

The land for this installation originally consisted of 360.85 acres. Sometime after the United States acquired the land for this project, the City of Shreveport constructed a public road (Saint Vincent Avenue) across the western side of the property, which physically separated 25.78 acres from the rest of the project. These 25.78 acres were sold by the U.S. in 1957; while the remaining 335.07 acres (along with 35 structures) were sold in 1961. Now that the Inner Loop and Industrial Loop cut across the property, the size of the park is less than 335 acres.

My notes described [the engine house] as a "91x46-foot concrete slab with two railroad tracks embedded in it, and an attached 28x30-foot slab, all surrounded by an 8-inch think concrete wall 3 feet high. There is some debris in and around this item, apparently left over from when the wooden portion of the building was removed."

Today, the park sees little rail traffic if at all, save for the trains on the parallel KCS mainline which used to serve the tracks. Most of the tracks and switches are in disrepair; some of the tracks are even disjointed or broken altogether. Ash Grove Cement, at the northern end of the park, is served by the KCS on a regular basis; its lead track is maintained. Beaird Industries also uses its own switchers and cars for moving equipment and ore cars about its facility; one can witness a pickup and setout of flatcars to Beaird by KCS at least once a week.

Slack Industrial Park is visible at Google Maps. The link shows the southern end of the Park where the tour starts.

The pictures below were taken during my visit to Slack Industrial Park on December 28, 2005. I have visited the park before and have walked along the abandoned tracks many times. Not much has changed here in the past couple of years. It's almost eerily quiet, as thoughts of when trains used to rumble down these tracks filled my mind.