In 1874, the railroad's name was changed to the Chicago, Milwaukee & St. Paul Railroad, generally known as "The Saint Paul Road" or just "The St. Paul" for short. At that time, the railroad extended from Chicago north and northwest well into Minnesota and embarked on a period of expansion. The road reached Council Bluffs, Iowa, across the Missouri River from Omaha, Nebraska, in 1882, and reached Kansas City, Missouri, in 1887. By then the map of the railroad included four east-west lines across northern Iowa and southern Minnesota.2

In 1901 the railroad decided it needed an outlet to the Pacific. Its western connections were controlled by Edward Harriman (Union Pacific) and James Hill (Great Northern, Northern Pacific), both of whom controlled competitive lines parallel to The St. Paul. In 1902 a proposal was made to build west to Eureka, California; but in 1905 the decision was made to head for Puget Sound instead. Construction began in 1906 at Mobridge, South Dakota, and in 1909 the Pacific Coast Extension was completed, through territory served heavily by the Northern Pacific and indeed often within sight of that railroad. The cost of construction was more than four times the original estimate and the CM&St.P subsequently electrified 656 miles of the new line through much of Montana, Idaho, and Washington: adding substantial amounts of red-ink to company legers.2

In 1921, The St. Paul leased the Chicago, Terre Haute & Southern to gain access to coalfields in southern Indiana. This route would later become The Milwaukee Road's Terre Haute division, running due south from Chicago, following the Illinois-Indiana Stateline to its namesake: from there branching to numerous mines, heading east, and ultimately terminating in the hamlet of Westport, Indiana. The CTH&SE was incorporated in November, 1910, to take over properties of the Southern Indiana, and the Chicago Southern: both railroads of which were in the hands of receivers and sold to the new company under foreclosure. In 1913, a lease with the Baltimore & Ohio Chicago Terminal was agreed to, giving the CTH&SE two terminal connections in Chicago, Illinois. The lines were combined into one operation as the CTH&SE, and accordingly, the company was often called "The Southeastern."2

The Milwaukee Road" or simply "The Milwaukee", emerged from reorganization in 1928, only to enter receivership again in 1935. The Milwaukee Road was reorganized again in 1945, and yet again entered reorganization proceedings in 1977. Throughout this period the company projected an image of resourcefulness to the public. The Milwaukee Road ran gorgeous streamline passenger fleets called Hiawathas, scheduled fast freights between Chicago and the Pacific Northwest, acquired locomotives intended for use in Russia for its aging electric plant it subsequently upgraded, and purchased a unique secondary main which ran deep into the heart of the southern Indiana coal fields to break an effective competitor monopoly on locomotive fuel supplies.2

Coal moves were always a large portion of The Milwaukee Road's freight tonnage, but it did not become intrinsically linked to the commodity until its predecessor's entry into Indiana in 1921. Approximately ninety-percent of the CTH&SE's historical traffic base was coal. Control of The Southeastern meant access to the virtually unlimited supplies of the bituminous coal in the Indiana fields. Cheap coal was important during those days: not only as steam locomotive fuel, but as a way to thwart the monopoly power used by the railroad's competitors. The CM&St.P leased the CTH&SE for 999 years, and in 1922 it acquired the Chicago, Milwaukee and Gary to gain access to the CTH&SE. The $20 million cost of buying the CTH&SE, absorbing its debts, and fixing it up were major factors in The St. Paul's 1925 bankruptcy. The full purchase of the CTH&SE by the parent company, then The Milwaukee Road, was finally consummated in 1948.1 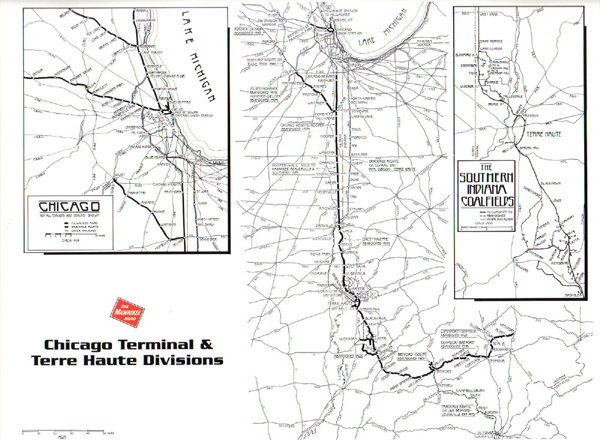 The Southeastern's primary operating role throughout the steam era was in hauling coal to Chicago, where the route intersected with the rest of the system. Coal continued to be the mainstay commodity of the Terre Haute Division until diesel-electrics began to dominate the locomotive fleet. In a sense, The Southeastern was also a through route, intersecting at numerous junctions with eastern carriers. The Milwaukee promoted these connections vigorously, as The Southeastern was an eastern road for the purpose of rate divisions, and thus to The Milwaukee's advantage in interchange of long-haul traffic somewhere on that route, instead of in Chicago.3

By the mid-1950s, most of the many underground coal mines served by The Southeastern were defunct and their spurs abandoned: the east end of the division was trimmed back 26 miles to Seymour, Indiana in 1961. The Southeastern slid into senescence, its track gradually reclaimed by the countryside. However, this sleepy status changed on March 1, 1973, when the line was extended from Bedford, Indiana, to Louisville, Kentucky, with acquisition of trackage rights over the former Monon mainline. These trackage rights, mandated by the ICC in 1970 as a condition of the L&N takeover of the Monon, were held up while the L&N fought the award in court. By virtue of these rights The Milwaukee Road had the longest line-haul in the country and was the only western carrier to actually reach through Chicago to any major eastern city.3

At first the trackage rights to Louisville weren't of much use, since in 1973 The Southeastern was in great disrepair, and The Milwaukee did not have the required reconstruction capital. To solve this dilemma, in 1979 the railroad forsook its own right-of-way north of Terre Haute, Indiana, in favor of trackage rights over Conrail's former New York Central (Big Four) "Egyptian" line, which ran the length of the Illinois-Indiana Stateline from the south-side of Chicago, through Terre Haute, all the way to Cairo, Illinois. Actually Conrail's track north of Danville, Illinois was not much better than The Milwaukee's, but the two railroads could then split maintenance expenditures on one route, to help turn a profit. The Milwaukee Road's trackage between Terre Haute (Spring Hill Tower) and Bedford was substantially rebuilt to complete the Chicago-Louisville route. This vestige of the CTH&SE remains in service through southern Indiana to this day.3

Much of the rest of The Milwaukee Road's vast system did not fare as well. The major result of the 1977 reorganization was the abandonment of all routes west of Miles City, Montana, to concentrate on a core system called "Milwaukee II": serving Chicago, Milwaukee, the Twin Cities, Kansas City, and Louisville. In 1980, The Milwaukee Road was poised to reap the benefits of hauling increased coal tonnage once again, but instead from the Powder River Basin in Montana and Wyoming, serving power plants in the core, and far to the east, with low-sulfur sub-bituminous coal. But, like a curse, mismanagement and corruption plagued the organizational efforts: in 1982 the company sold the remainder of its former transcontinental mainline west of Ortonville, Minnesota to the State of South Dakota.2

On March 1st, 1986 the CMStP&P was merged into The Canadian Pacific Railway's subsidiary Soo Line, and The Milwaukee Road passed into history as a shadow of its former self. On May 28th, 2006, the Indiana Rail Road assumed ownership of the remaining Southeastern trackage in Indiana between Terre Haute and Bedford; finally excising it from The Milwaukee Road, Soo Line and Canadian Pacific family tree.2

Thanks to Chad Pfitzer for contributing information.