Keller, Texas, was first founded as the farming community of Athol in 1881, when the Texas & Pacific Railroad started rail service on its line between Fort Worth and Texarkana. The town quickly grew in population, and the name was changed to "Keller" in honor of a T&P foreman, John C. Keller. The railroad served Keller very well, allowing the town to prosper as a trading center for nearby farms. The town itself was incorporated on February 20, 1958, still being served by the railroad (now the Missouri Pacific, and also the Missouri-Kansas-Texas via joint trackage).

Today, Keller is a bustling community with over 30,000 residents, and is still growing. The original tracks still run through Keller, and see frequent rail traffic as Union Pacific's Choctaw Subdivision. While Keller is no longer served by the railroad, the community is dedicated to remembering its roots and its beginnings -- a true railroad town. A view up and down US Highway 377 in Keller's historic downtown reminds Keller citizens of their railroad heritage.

More information about Keller, including history and maps (both topographical and satellite imagery) can be found at Wikipedia. 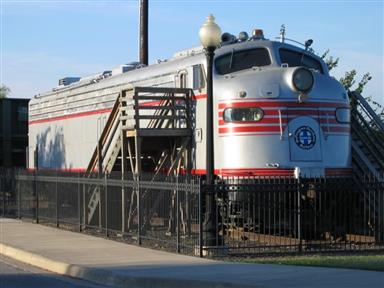 The most visual and prominent reminder of Keller's railroad history is the E9 passenger locomotive on static display in Keller's historic downtown area, donated by BNSF. Originally a Chicago, Burlington & Quincy locomotive and number 9990, the E9 saw passenger service in both long-haul and commuter trips. It served as power for such trains as the Denver Zephyr; it its later years, it served for push/pull commuter service in Chicago. It was brought to the town in 1998 in BN paint, it sat for a year before it was finally painted in its original livery, the Chicago, Burlington and Quincy colors (sans the word "BURLINGTON" stenciled along the sides).

The E9 is situated next to and parallel to Union Pacific's Choctaw Subdivision. Curious that Burlington Northern Santa Fe donated the engine, despite the fact that it was the Texas & Pacific Railroad (now Union Pacific) that served Keller, and continues to send trains through Keller daily. Behind the engine are a BN flatcar, and an ATSF boxcar. The city intended to use the flatcar as a stage for community performances and events, but it has yet to be used as such.

Keller did see railroad service up until a few years ago. Keller Building Supply owned and operated a small railroad spur that was served by Union Pacific; this property and spur have now been abandoned. The spur is located at milepost 740.3, which, incidentally, is located opposite the BNSF E9.

Here is a track chart showing the Keller Building Supply spur on UP's Choctaw Sub. It's indicated as Track 753.