In 1941, on the outset of the United States' direct involvement in World War II, a new plant was built on the west side of Fort Worth, Texas, officially named Air Force Plant #4. Its sole purpose was to build B-24 Liberators by the Consolidated Vultee Aircraft Company. The plant continues to manufacture airplanes to this day, and has seen many contractual owners since the war: Convair, General Dynamics, and now Lockheed Martin. It has also produced many planes in its history; after the B-24 during WWII, it also produced B-29s, B-36s, B-52s, F-111s, F-16s, F-22s, and F-35s, the last three of which it currently produces.

Once Air Force Plant #4 was built, it didn't take long for the Air Force to build a base adjacent to the plant, Carswell Air Force Base. It has also undergone some changes, as it is no longer an Air Force Base, but a joint Naval Reserve base; thus it is called NAS JRB Fort Worth. A more detailed history of this installation can be found at the U.S. Navy website.

During WWII, materials and prefabricated parts for the bombers needed to be shipped to the bomber plant; it was deciced to ship them in via railroad. Thus, the government contracted the Texas & Pacific Railroad to build a railroad spur from the T&P's mainline (about 5 miles to the south) to the plant. And so the "Bomber Spur" was born. Soon after, Carswell AFB needed jet fuel for their airplanes, so the T&P constructed a spur to Carswell that connected to the Bomber Spur that served the plant. 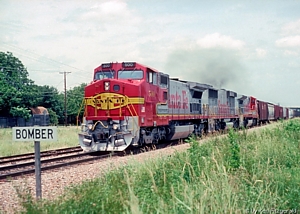 A Santa Fe freight rolls by the Bomber Spur.
Photo by Ken Fitzgerald.

Officially known as "Carswell AFB Industrial Lead", the Bomber Spur served both the "bomber plant" and Carswell. It handled bulk materials to the bomber plant (in various types of cars), and jet fuel to Carswell (mainly in tanker cars). After the war, the spur was used for many years with decreasing regularity. After some time, a pipeline was installed to transport jet fuel to the base, thus the tracks to the base were no longer need or used. The arrival of bulk materials to the plant by truck was a sign of the beginning of the end for the Bomber Spur, and the tracks lay dormant for a few years before finally being removed.

A General Electric 44-tonner, USAF 1241, was used for switching duties on the spur; it was excessed in 1995, and sold to Dallas Area Rapid Transit, where it was discovered that it could not be used on DART's lines due to tunnel clearances. The switcher is now preserved and on display at the San Angelo Railroad Museum in the Atchison, Topeka, & Santa Fe "Zebra" paint scheme.

This small part of a Fort Worth map which shows the tracks of the spur within Carswell AFB.

Click here to open a window showing the track chart for the Bomber Spur, produced by the Union Pacific Engineering Department. A couple of things to note:

• The General Dynamic (GD) side of the spur is on the left side, the Carswell side of the spur is on the right
• While the track was constructed by the T&P railway, it is "owned by industry", which is to say that the government owned the tracks
• The only highway crossings indicated are "State Highway 377" (which is incorrect, since 377 is a "US" Highway) and Interstate 30; other highway crossings include Texas SH 183 (twice), and State Spurs 580 and 341
• "Kings Branch" and "Farmers Branch" are creeks or ravines; the bridges used to traverse "Kings Branch" are shown in the tour
• The end of UP ownership of the line occurs at MP 0.04 (or a little over 200 feet from the switch)
• Around "State Higway 377", there appears to be two tracks that branch off from the main for a short distance (indicated by the little markings on either side of the highway crossing). While I did not notice such track branches on my last visit, and while the track markings are too short to indicate a siding or branch of meaningful length, this will certainly warrant another trip to the spur and a closer investigation around US 377 on my part